14 December 1945
Lieut Cecil Ian Steen, son of Mrs Steen, 6 Newton, who has been posthumously mentioned in despatches, "in recognition of gallant and distinguished services in Burma" was one of Wingate's famous Chindits.

The members of the battalion have sent Mrs Steen a brooch embodying the badge of the 6th Ghurka Rifles, and a Chindit badge, "as a small memento of one of the most daring and successful operations in military history, in which your son took part". While Major-General Lentaigne, who succeeded Wingate in command of the Chindits, has written her says "your son undertook cheerfully and with no thought of self a task that ranks with the most hazardous and difficult asked of any man in this war."

Before the war, Lieut Steen was a law student at London University.

Lieut-Colonel NFR Shaw writes that the brigade to which he was attached came to be known as "Mad Mike Calvert's". Lieut Steen was Animal Transport Officer in Colonel Shaw's column. Their task was to carry everything they needed on their backs, live hard, and operate well behind enemy lines, disorganising, harassing and sabotaging. They got their supplies by air.

The flew into Burma, landed at a clearing in a dense forest and from there walked for nearly ten days, to their first objective, fighting sundry battles with the enemy. "It was at this time that Ian first showed that great courage which characterised him later," writes Colonel Shaw.

Most of the enemy attacks used to come at night, at which period the brigade had also to carry out their Air Supply Drops. This involved having large fires along the centre of the position to give the planes a line on which to drop, and these fires had to be kept going ireespective of enemy attacks.

"Whenever it was the turn of this battalion, it fell to Ian and the Transport personnel to carry out this task. It was entirely by his personal cool leadership that the task was carried out, " writes Colonel Shaw.

When they had raised the block that was their first objective, and moved north to harass the enemy in another area, Lieut Steen carried out what Colonel Shaw describes as a "very meritorious task". He went off with three other men on a long-range patrol into enemy territory, lasting the best part of three days. By that patrol the battalion were able to get information of enemy dispositions prior to their advance on Mogaung. It was after that patrol that Colonel Shaw moved Ian into the Rifle Brigade as company officer.

From there, they advanced towards Mogaung, and by the paths they took, they were able to surprise the enemy and capture much material and ammunition of all types at very little cost.

"From this period until Mogaung itself was taken, it was a succession of fierce engagements in each of which Ian played his part", writes Colonel Shaw. "Ian was killed on the outskirts of Natigigon, a suburb of Mogaung, personally leading his men against a position from which very heavy fire was coming. Thanks to his leadership, these men took that position."

Ian was buried where he fell, and Colonel Shaw concludes: "We all feel Ian's loss tremendously. He was such a cheery chap and loved a party. You have the pride and we have the honour of knowing that he died very gallantly to fulfill what has been a great achievement."
Posted by ADB No comments: 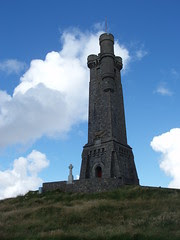